To all my US citizens family and friends


I know some of you are feeling disappointed or mad because your first choice for candidate in this election wasn’t the chosen one to be in the presidential final run. I know that feeling, BELIEVE ME. I’m familiar with that hole in the stomach caused by thinking these are going to be lost years. But I still went out and voted, because one has to make a choice, take a stand and participate.

I know you might be asking why I should care for what happens in your elections, but I do. My country does. The whole World does! We are all watching you, kinda powerless, hoping for you to participate and make your voice count (#VotoLatino, bitches).

Don’t make the mistake to think those two candidates are the same rotten crap, because they are not. We all can tell the difference between a politician and a charlatan, between facts and rubbish. Please, think in the best interest for your country and our planet. Register and vote. Use your power.

Don’t be naive enough to think “There’s no way this racist, misogynist, rabid coward, faked tanned asshole could win. Only morons would vote for him”, because, guess what, there are A LOT of morons out there. And, let me tell you, that’s what some people here in Mexico thought, and now we have our own asshole sited in the presidential chair and will have for the next two years. And I just can’t tell you how much our country is suffering it (I didn’t vote for him, just putting that clear ).

So, I can’t say this enough, register and vote. Take two minutes and help someone else register. Don’t be cynic about this that could be the most important decision you will be taking in this century. 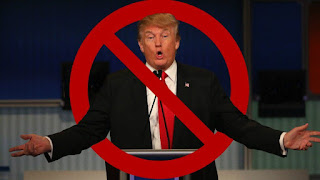 I hope this song to empower you: Voto Latino de Molotov. Go vote!